Hardly Mother of the Year 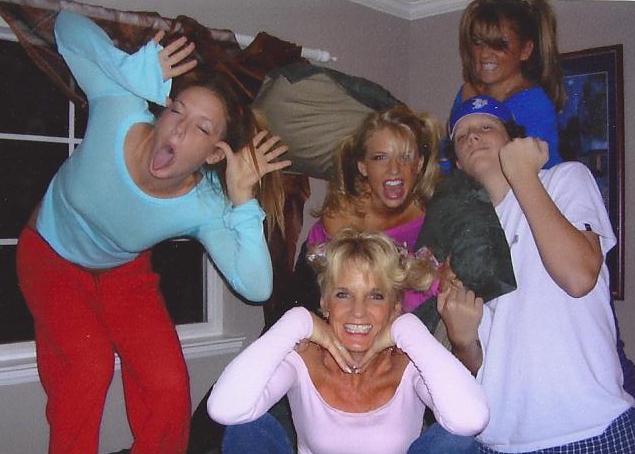 Back in the days of raising grammar school children, life wasn’t just hectic; it was like careening in circles on Space Mountain in Disneyland with no way off. Each morning, as I dragged my still tired brain out of bed; I went to the calendar to check the color dots – one for each of my four hooligans. It was my way of visualizing who’d need my undivided attention after school. Some days, it was all of them.

In those early years, I dreamed of being the perfect mother, wanting everything to flow just right minute-by-minute, while never missing a beat. Unfortunately, I failed miserably more often than not.

On a particularly frenzied day in April 1988, I did as I always did for after school pickup: I arrived early to find the closest parking space at St. Simon’s School so my little darlings wouldn’t have to walk far to find me. God forbid they take any extra steps after a long day of coloring. With the ding-a-thing of the dismissal bell, I knew Michelle (7), and Jenni (5) would be skipping out any second. I already had Lauren (3) and Timmy (a newborn) safely strapped in their car seats in my Toyota minivan. Before long, Michelle climbed in with her after school playmate, next Jenni, and, finally, my other two charges in the carpool. Counting all seven heads, we were good to go

But, as I pulled out of the parking space, I had a strange feeling something wasn’t right.

“What am I missing?” I mumbled to myself. “The kids are all here so why am I feeling off?”

Turning around to recount the heads, I found each seat belt had a child attached to it. Sensing I might be reacting overly dramatic, I squashed my mother’s intuition and rallied on. Knowing the kids wanted to get on with their afternoon, I maneuvered into line with the other vehicles when suddenly I froze as I peered into the rear view mirror.

“Oh my God!” I screamed, slamming on the breaks. “Jenni!”

There, still on the curb, stood my second child waving frantically and sobbing hysterically.

“Mommy, come back!” she blubbered. “Don’t leave me here.”

Doing a quick U-turn, nearly knocking down a nun in the crosswalk, I flew back to retrieve my girl, fearful I damaged her psyche for the rest of her life.

“How could I have missed her?” I thought, mortified. “I counted all the bodies.” That’s when I did a double take on the wide-eyed faces in the back of the car and realized a stray had snuck in. Another little girl, looking very similar to Jenni with dark brown hair and a face full of freckles, decided she wanted a play date too.

Before I had children, I was amazing. In fact, I was near perfect. I was always on time, if not early, for work and special events. My home was spotless, clothes impeccable, and my hair constantly sprayed, teased, and in place, even when I woke up in the morning.

I spoke up for what I wanted on the menu, never acting like Helen Keller and eating the remains off other’s plates just to save money, and as for the bathroom, well, when I had to go, I went. There’d be no holding it in while allowing others to relieved themselves first. But, from the moment they were born, their needs came first, because their life was my life.

As the years went by, and I struggled to get to the end of each day still in one piece with my ego intact, I learned “Mother of the Year” I was not, nor would never be, for the faux pas would be many.

I served undercooked meat and overcooked vegetables, burned cereal boxes in the oven that we used as storage, starched and ironed school blouses a little too stiff for their liking, folded the dirty clothes as I re-washed the clean ones, called my son every female name in the family, including the dog’s, when upset over something naughty he’d done, and hovered over my darlings like an Apache Attack Helicopter. Never would I allow them to pay the consequence for a lunch or school project left at home. After all, I was sure it was my fault that I didn’t remind them to take it in the first place. No, this helicopter mother snuck onto the campus when the principal wasn’t looking and did the handoff at recess.

And, fearing any confrontation over my forgetfulness, I often lied, especially when arriving from the grocery store without something on their wish list of delicacies. Sadly for me, it wasn’t long before they wised up to my tactics. What store ever runs out of apples or oranges?

Now that I’m older, I marvel how any child makes it to adulthood in one piece with all the mistakes mothers create along the way. I often wonder if it’s nature’s way to illustrate survival of the fittest. Whoever can rise above a mother’s well intentions and overzealous enabling will do just fine in life.

It’s been twenty-nine years since that distracted day, and I have to admit, it still haunts me when I think about it. Jenni says she forgives me, but just to be sure, she’s allowed to ride shotgun whenever we’re all together. I’m taking no chances.

In celebration of Mother’s Day, I tip my hat to all the mommies who, like me, were never exactly “Mother of the Year.” Motherhood is permanent employment from which there is no retirement, so there’s bound to be some bumps, bruises, and boo-boos. And, maybe, that’s not such a bad thing in the end. Let’s face it. Children, no matter how old they become, learn by our example (not our words) and by showing our flaws on a daily basis gives them permission to do the same without guilt. It allows them to be that wonderful thing called human and that, in and of itself, is perfection.