Come Back as My Children 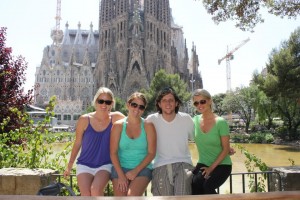 Waving goodbye to my daughters as they boarded a plane for three weeks on an all expenses paid trip to visit their brother in Barcelona, I couldn’t help but think, “I want to die and come back as my kids.” Oh, the privileged life they’ve lived and the places they’ve traveled — and much on my dime.

When I was young in the 1950s and 60s, times were hard. Children in our sleepy town of San Carlos, CA had to trudge ten miles in the snow to school – uphill, in both directions, and on bare feet!

Ok, maybe that’s a bit of an exaggeration, but it was a requirement that I get to school on my own, either by foot or bike. My kid’s mode of luxury transportation, the carpool, didn’t exist. No, my generation of helicopter moms changed all that fearing our baby’s legs would break carrying a heavy backpack.

As for vacations on some exotic beach, well they weren’t even a consideration because money was always tight. From the time I was ten, if I wanted to visit some faraway place, I discovered it through books from the local library after I completed my summer jobs of babysitting and teaching swim lessons.

And, unlike the countless excursions I spent with my girls, shopping sprees at the mall were unheard-of phenomenon. My mother only bought me something new when I outgrew what I had.

When my kids came on the scene in the early 1980s, I vowed to give them everything (and I mean everything) I never had. First, there were the expensive shoes that lit up as they learned to walk because I didn’t want to miss one glittery moment of their development. If one new bathing suit was good, ten were better. God forbid they put a wet one back on. And, as they got older, each had their own computer and cell phone. Staying connected with friends was tantamount over spending time with me. And while that may have bruised my ego, I was determined to lasso the moon and hand it to them on a Pottery Barn wooden platter, so I spoiled them constantly.

Now that they’re adults with families of their own, I’ve had time to reflect on their upbringing, and sometimes I wonder who did have it better. Yes, I had far less material pleasures, but I also grew up in a carefree, fairytale land where my imagination was allowed to run wild daily as I played in the fields that surrounded our home.

School never brought me the angst it did my children. While good grades were important to my parents, if the report card came, and it wasn’t stellar that quarter, they would gently say, “You can do better next time. Do you need some help.” My kids, on the other hand, seemed to worry about what college they would one day go to from a young age as their teachers stressed the importance of education. No matter how hard I tried to ease their worries, they became caught up in the competition to be the best.

So, who had it better — them or me? It’s actually hard to say. My life was simple and stress-free. They had all the material gadgets and gizmos to make it fun, as well as opportunities for lots of travel. But I’ve learned a lot over the years, and if my kids cared to listen to my wisdom to help with their little ones, I’d tell them the following:

2. Slow down, for it all goes too fast. As the toddler stops to look at the ladybug on the driveway while you race for the car, stop too. Marvel together over its little legs slowly moving across the concrete. Talk about the bug and the importance of its life. This is where they learn about humanity. Then gently help it back to the bushes so it can survive another day.

3. Never forget that spending five or ten extra minutes in bed snuggling in the morning, reading that book for the fifth time, won’t make the earth fall off its axis. Sure, everyone may be five to ten minutes late for school and work, but the memories of those moments will be far more precious than constantly being punctual.

4. When it comes to family vacations, once in awhile, make sure they’re about one thing — the family. Sure, riding Space Mountain at Disneyland or traveling to Europe to see five countries in seven days can be exhilarating. But I’d like to know they’re taking a long weekend in nature where they get to feel the dirt between their toes and revel in God’s glory. The skateboards, roller blades, electric bikes and cars will be there when they get back.

5. And, while formalized religion seems to have found its way to the back burner for many these days (I raised my family in the Catholic tradition, today no one practices), I’d stress the importance of their spiritual connection to the Universe so they can teach it to their children. There is nothing greater than honoring the higher power through prayer.

We all love new stuff, toys electronics, cars, even clothes, but at the end of the day, that’s all it ever is — stuff. It’s not the warm bed that allows us to dream carefree, or the delicious meal to fill our tummies. It’s not the gentle breeze on a hot day that plays with our hair, cooling us off, or the time spent with one another. For those are the things that add true value to life.

No matter how one parents, whether it be the indulger or minimalist, in the end all we want is for our kids to be happy. What better way to instill that than teaching how to be grateful for all they have — whether it be big or small.