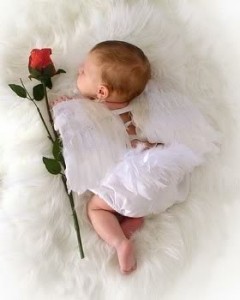 “Jackie, you have to leave,” the kindergarten teacher whispered, gently nudging me out the classroom door. “You’re scaring the children .”

It was 1993, and my baby, Timmy, was about to begin his illustrious school career at St. Simon Catholic Grammar School. Looking like a happy-go-lucky Smurf in his tiny blue uniform, blond curls dancing merrily in the wind, he bravely escaped my vice-like grip and ran straight for the book corner. Watching him fly off to the great unknown and be one with twenty-five other smurfs and smurf-ettes, I broke down into convulsions and sobbed hysterically.

“You know he’ll be ok. You’ve done this three other times,” the teacher, Joan Morris,  tried to soothe me.

Wiping my dripping nose on my sleeve, I peered into her loving face, and said, “Oh, I have no worries about him! It’s me that I’m concerned about. I have such a hard time letting go.”

Releasing a 5-year-old to their first full day of school is upsetting for many parents.  You know they’re about to be influenced by their teachers, administrators, and peers. From that point on, they belong to the maniacal claws of the world and will soon develop their thoughts, opinions, desires, and hopefully, conscience. While the parent is still a major influence in their budding lives, they are no longer in complete control.

Freeing each of my four kids to kindergarten never got easier. In fact, it was my complete undoing. Returning home after the drop-off, I’d wander around the house aimlessly counting the hours until I picked them up again. Sadly, and I’m embarrassed to say, the ensuing years didn’t get any easier. I saw every graduation and the first day of the school year as just another lost piece of their childhood. Already famous for wanting to freeze-frame each moment of their lives, you can imagine my utter dissolve when they moved away from home.

By 2011, my 23-year-old son had grown into a man. He’d graduated from ULCA, work a year at LinkedIn, and then proudly announced he was moving to Spain. A nagging voice deep within his soul was calling him to return to the foreign country he fell in love with while studying abroad.

“Are you sure you want to do this?” I asked, panicked, fearing I’d lose him forever.

Holding back the tears, I whimpered, “Well, just promise me you won’t fall in love with a Spanish girl that doesn’t want to live in the United States. I want you back!”

As I studied the face of the boy I lovingly called my “man/child,” I knew I shouldn’t try to stop him. After all, this was who I trained him to be– an independent thinker prepared to follow his dreams. But why did his dreams have to be so far away?

Dropping him off at the airport, I held onto his massive six-foot frame, blubbered like a toddler who just got her finger stuck in the door, and said good-bye. But despite my angst, I realized this new adventure would be good for him. He would mature, learn more about life, himself, and grow immeasurably from this experience.

Driving away, I thought about the days I gave birth to my kids. On those days that honor them, I offered them life – their life. While I struggle to remember this at times, I know their journey is not about me, but them. They’ve never belonged to me. I was just a conduit to help them find their right path. And the result? Three adult daughters and a son who are totally self-sufficient and wonderfully unique individuals. They’re their people and not clones of their parents.

I’ll never be able to withhold the tears when I kiss any one of them good-bye. Fortunately, maturity (and a lot of acting) has refined my ability to wait until they’re out the door before I break down. But I have come to appreciate that each new departure is just another wonderful step toward becoming who they were born to be. Maybe it’s time I started doing the same for me.

We all came here with a mission and a purpose. Unfortunately, many of us blow through our days never knowing what that is. We get so caught up in the physicality, rules, and duties; we don’t take the time to look inward to cultivate that one thing that sets us apart from everyone else. I know for me, it’s been my neglect of my artistic nature. But, it’s never too late to turn that around. Now that my kids are gone, I’m turning bedrooms into offices and the family room into my art and music studio. What have you done for yourself lately?