Time to Speak Up! 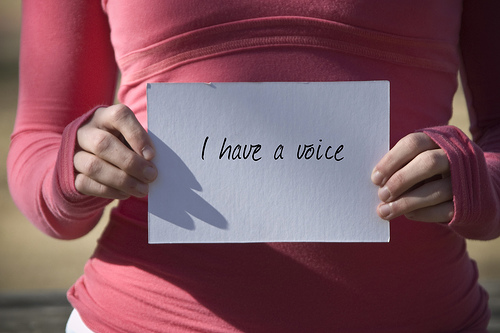 Feeling the heat from beady eyes over my shoulder, I wanted to turn around and punch the kid behind me for stealing the answers to the test off my paper. But, knowing he was the 8th-grade star athlete, as well as charmer all the nuns loved, I felt it best to keep my mouth shut. She’d never believe me anyway.

Going to St Charles Catholic Grammar School in the 1960s, it was well ingrained into all the students not to tattle. The nuns had more important things to deal with, like drilling religious training into our brains and making sure our souls were pure than coping with crybabies and snitches. Consequently, I was conditioned at an early age to keep my mouth shut, especially when it came to seemingly more powerful individuals who were out of line; especially if the actions were against me. A conditioning I carried for years.

From 1976-1979, I worked for a real estate company in San Francisco. I was one of four women employees surrounded by highly charged and aggressive male counterparts. It was a good old boys club where sexual comments, pats on the rear-end, and jokes about body parts were considered part of the daily routine. Despite the fact I grew up with three brothers, as well as all their friends, I’d never experienced such behavior. Trying to stand up for myself to make them stop, I was told to think of the remarks as a compliment and that I should be happy I was being noticed.

Struggling with how to deal, each day I’d put my head down, do my job, and left the minute the clock struck 5:00. But, there was one man in the middle of this wild animal park with whom I found solace: the Irish Catholic vice president – a man just like my dad.

While I never spoke of how abused I was feeling, I’d often find myself in his office pretending I had things to talk about just to get away. We became great friends as we shared information about my family, my comings, and goings, as well his children who were my age, and stories of his lovely wife. His family became my family as I attended weddings and dinners at their home.

In 1979, the office moved to Walnut Creek, and not wanting to deal with the traffic even then, I left and found a new job. A month later, my friend called to say he’d be in town and would I like to have lunch. Delighted to catch up, I asked where we should meet.

He told me of a new apartment the company had just bought behind the Embarcadero high rises with exceptional views of the bay, and that he’d bring sandwiches. Being the naïve and trusting young woman I was, I thought, “How fun!”

Traveling up the elevator, I felt no fear. After all, he was a father figure: a devout Catholic, someone who listened to my dating woes, and gave me sound advice. Ringing the doorbell, this distinguished looking gentleman politely ushered me in and began to provide me with the tour: first the living room, then the kitchen, and, finally, the bedroom. That’s when I notice he was sweating profusely.

“Are you alright?” I asked, wondering if he suddenly was coming down with something.

With his eyes now bulging, he grabbed ahold of me, shoved me into the corner so I couldn’t escape, and began kissing me. Fear consumed every breath I tried to take as I wondered how this could be happening?

As he pressed harder, my animal instinct of fright or flight took over, and I somehow managed to push him aside. Running for the door, I escaped just before he could grab me again.

In the months and years that followed, I kept silent afraid that possibly I did something to provoke the incident. I loved this man. He was my friend and confidant. It had to be my fault. Why else would he behave so out of character? But, I couldn’t begin to understand what I did wrong.

Then, there was his wife and children to considered. Would they even believe me? And, if they did, how tragic would it be for them to find out the husband and father they knew was a letch. It stung to think I had information that could destroy a family. So, for the next forty years, I’ve never discussed it and, oh, the regrets I’ve had.

I regret my self-esteem was not strong enough to realize I did nothing wrong and that I carried shame with me all these years. I worry that because I didn’t stop him, he may have continued with other unsuspecting young women. I regret not telling his wife because we all deserve to know who we are married to. And, I’m saddened to know that things haven’t changed in our society. That women and men are still used as sexual tools without their consent and then lie in fear that they just have to take it, or suffer some consequence.

Today, I ask, “Why is it that those in high power or status are allowed to live by different standards. Why do we still look away and forgive them their indiscretions? Harvey Weinstein has made this whole issue so crystal clear. Why do we, a civilization of intelligent people, still accept disgusting behavior in people of a so-called higher station of power and privilege?”

While the incident didn’t turn out as badly as it could have, I’ve lived with the scars that oozed for years, continually reminding me that I felt I wasn’t good enough to be heard. Maybe it’s time we as a nation learn to speak up – for ourselves and anyone else we see being abused. I know we’re so much better than this, myself included.