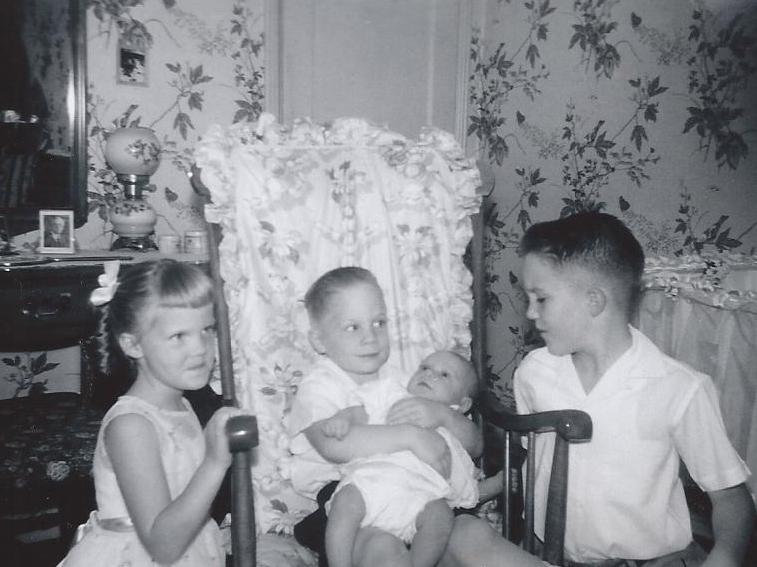 Soaring my swing high above the ground, I was sure if I pumped my seven-year-old legs harder, my feet would touch the clouds above. I was blissfully unaware of how important that effort would soon become.

Distracted by my proximity to the clouds, I hadn’t noticed the pack of wild dogs gathered below, their fangs now salivating for the taste of blood. Each time I swung by, filthy claws reached out to scratch my legs. The barking turned into vicious howling threats as I started to panic, and before long, I assumed my life was over.

“Get off the swing, stupid!” The pack’s leader seem to threaten, swiping his paw even closer to my ankle.

My older brother, Dave, warned me to stay away from this highly coveted boy-toy. But never being a rule follower, I couldn’t help myself even though I knew better than to trespass.

As the tallest mongrel in the fray grabbed the rope, sending me tumbling to the ground, I was resigned to my impending death. But suddenly, off in the distance, I heard my savior coming to the rescue.

“Leave my sister alone!” Dave demanded. Picking me off the ground, he defiantly turned to the others, and hissed, “Don’t ever touch her again.”

Taking my hand, the love in my heart for my big brother exploded. Typically, Dave had little time for me, but in this endearing moment, I actually felt he cared. He’d proven it! That is until we were out of the view of the others.

Turning face-to-face, anger burning a hole through my forehead, he screamed, “Don’t ever embarrass me like that again.” And with a hefty shove, off I flew into the rain-soaked gutter. Stunned, I went crying to my mother.

“Honey,” she began sympathetically. “I know it doesn’t feel like it, but David does love you. One day you’ll see.”

For years, I kept waiting for a sign. Instead, I was told, “do this, don’t do that, leave me alone.” Brotherly displays of affection would have to wait. Dave was too busy growing up.

With my brother Tim, I fared differently. Since he was just twenty months younger, I provided companionship. Together, we happily entertained our baby brother. But even that didn’t stick, and one day I felt his wrath as well.

While defending my honor in the 7th grade, Tim broke his hand punching a boy who teased me about my undeveloped chest. After the kid had run away to stop his bleeding nose, Tim looked fiercely in my direction, and spit out: “hurry up and grow some boobs!”

Over the years, how I longed for a sister. I felt alone, unappreciated, and was sure my placement in my family of all boys was one of God’s rare practical jokes. The sibling connection can be especially complicated in the early years.

Children come into this world and, by virtue of birth order or chromosome blending, they seek ways to not only fit in but also to shine—their young voices roaring. The Madden kids were no different. We not only conversed in foreign tongues, but we also came from opposing planets. Just when I felt all was lost, time spun her magic on the clock.

As the years licked away at my brothers’ candy-coated Lollipop exteriors, the hard shell slowly began to dissolve exposing their softer, sweeter core. Lucky for me, I became the major beneficiary.

I have to admit; I miss the days when my mighty warriors defended my honor as a little girl. But I know what I have presently is far richer. By allowing our egos to mature into a place of compassion and empathy, we now walk into our sixties holding hands instead of clinging to a fierce language that no longer speaks to the heart.

As siblings, the one thing we’ll always share is the same history, the same memories, and because our parents fostered it, a love that needs no interpretation.

It’s been said the greatest gift a parent can give a child is a sibling (or two), although sometimes it doesn’t feel that way. We all have issues with our brothers and sisters at some point. I’d love to hear about a time when you felt you crossed a major threshold with one of yours.