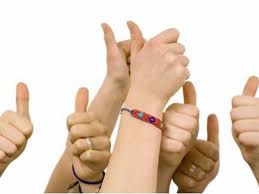 With a look of absolute horror in her rich, mahogany-colored eyes, my 13-year-old daughter Lauren stared at me, mouth wide open.

The year was 1998, and my precious baby girl was not happy with my appearance. Apparently, she deemed my attire inappropriate for her confirmation at St. Simon Church.

Turning back to the mirror, I couldn’t imagine what was wrong. My hair was styled to perfection and make-up understated. The dangling earrings definitely made a fashion statement but weren’t over the top and the sleeveless sheath dress hit just above the knee. Not too short, not too long. I thought I looked amazing.

“What’s wrong?” I asked, fearful of the answer.

“Your outfit is orange! Why can’t you dress like all the other mothers?” she shouted. “You look like a Spice Girl.”

While my children occasionally had labels for me, such as annoying, embarrassing, and dumb, tasteless was never one of them. Still not understanding what the problem was, as I’d worn the dress several times before, I decided to put up a fight. “Lauren, this is fine.”

“No, it’s not, mom! It’ll clash in the pictures with our red gowns.”

Due to my inability to handle criticism well, I looked at my child and internalized once again that I’d failed as a mother. Dejected, I returned to my closet for a different choice and found a simple little blue number.

Like many parents of my generation, for the past 32 years, I’ve been surrounded by four self-designated faultfinders when it came to my appearance, my views, and even my emotions. But, because I raised them to be independent thinkers, I’ve tried to be open to their words of advice despite the fact I’m often left wondering how I ever made it in the world before they were born.

Parenting has never been an easy task, partially because we want to be the ones in charge and ultimately right. When I think of my parents, while they were hands on and loving, they weren’t always receptive to my point of view if it didn’t coincide with theirs. I was forever the child and they the parent, even at the age of 60.

As my kids began to grow and evolve through their higher education, I realized that this Gen Y and Millennium generation is incredibly wise. They’re not labeled the “smartest generation” for nothing. I decided to stop pulling the shade over my fragile emotions as a defense mechanism and start listening. It wasn’t long before I came to understand their comments were coming from a place of love. They weren’t attacking me as a person, but providing a new perspective to some of my bad habits (such as how to use a spoon when eating ice cream directly out of the carton instead of my tongue) or occasional twisted ways of thinking.

Learning to be open to criticism has never been easy. I find it leaves me vulnerable as I’m forced to deal with my over-sensitive ego. But when I do allow the feedback to penetrate, it’s as if I’m able to look through a telescopic lens to parts of my life I once neglected or subconsciously refused to investigate.

So, kids, bring it on! I may not always agree with you, and I may temporarily get weepy (old ghosts have a way of resurfacing when you least suspect it), but you’re helping this old dog to continually learn new tricks. I know I survived long ago before you were born, but now I thrive with you by my side.

Oh, and by the way, Lauren, I may have never told you, but you were right. The blue dress was a much better choice for those pictures.

Criticism is never an easy thing to listen to. Besides the initial sting, it creates strong feelings of inadequacy. When I’m hit with a zinger by my kids or others, I find as my eyes begin to well, I need to take a deep breath and decipher why the remark was necessary in the first place. If I find it has merit, I listen. But in cases where it comes from mean spiritedness or jealousy, I have one of two choices. To respond in defense or walk away. How do you handle criticism thrown your way?