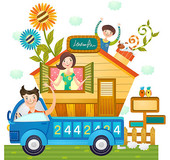 Selling real estate, even in the best of circumstances, is an emotional process. I’ve always had a deep respect for my clients who were letting go of a family home, though I never fully understood the complexities of that process until recently.

When my 95-year-old father moved in with me, I gained both a roommate and acquired a realtor’s prize possession, a listing. Upon his arrival, he announced that he wanted me to sell his house, which was also my childhood home. I knew it would be a difficult task, but I put my realtor hat on and went to work sorting through 52 years of papers, pictures, mementos, and junk.

My parents were part of that illustrious generation that never gave anything away. If I hadn’t known better, walking into their house l would have thought I was in the middle of a frightening episode of “Hoarders.” Every receipt dating back to the early 1960’s had been stored in boxes, drawers, and containers. They kept decades worth of tax returns, Christmas wrap, and insurance statements. As I sorted our life into piles, there was no time for tears. I had a mission to accomplish and quickly became de-sensitized during this purging process.

With three months of preparation, the property was finally ready. After the first weekend on the market, we received multiple offers from multiple families. My dad couldn’t have been more pleased with the result. Thinking about the numbers connected to the clients, a lovely young couple was chosen to pick up where my dad had left off.

When he asked to return so, he could say goodbye, I wondered how much he’d be able to see with his eyes failing more and more each day, but we made the drive anyways.

“Do you like the furniture?” I asked of the newly staged décor.

“I can’t see it, honey, but it looks great,” he responded.

My father soaked in each room, and I began to realize that what he was seeing was not what was present, but instead what was past. In his mind’s eye, there were the bedrooms where his children slept. In the living room, the couch was still perched in the sunlight so my mother could rest her tired body, and in the kitchen, the hub of our life, he could hear the nightly conversations, mixed with laughter, around the dinner meal.

As we strolled, no words were spoken. His crippled body was bent over in his wheelchair, but he quietly nodded as we passed through each room one more time. When we arrived back in the kitchen, he turned to me and said, “It’s time to go home.”

“No, honey. It belongs to someone else now.”

We all know a house is just a building that protects a family from outside elements, keeping them safe and dry. It’s the love that is created within those walls that makes a house a home. Wheeling him to the car, I watched him collect his memories and carefully place them in a velvet-lined box that he tucked deep in his heart for safe keeping. I could tell it was a box he would revisit again and again.

I’ll miss that house. I’ll miss the massive oak trees I climbed as a child, the street where I learned to ride my bike, and my yellow and green bedroom where I wrote in my first journal. But on that precious day, my father taught me the freeing feeling of releasing a material possession into the welcoming arms of another for a new life to begin.

Memories are a treasured gift we never say good-bye too. The sandbox where I played, the bathroom mirror I became a woman in, and the bedroom I dreamed my dreams are all in my mind to revisit.

No one knows better than one who has experienced closing the last volume to a family history when a home is sold. The emotion is great, but exhilarating just the same when you see the new owners thrilled at the expectations for their lives. Have you sold your parent’s home? If so, how did you get trough it?