A Father’s Language of Love 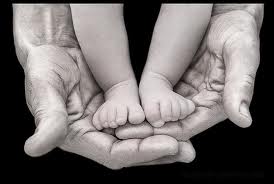 “How is your dinner?” I asked my father one evening, as I spooned another forkful of spaghetti into his mouth. Chewing madly to get ready for the next bite, he simply nodded his head up and down.

Since my dad moved in with me six months ago, there seems to be less and less he can do for himself. Bodily functions and cleanups are tasks left to his caregivers. His vibrant, cornflower-blue eyes have dimmed like a 100watt light bulb losing its power. His once powerful legs that walked miles to get to early morning mass lay broken and useless. Sadly, this once fiercely independent man had become completely dependent on his only daughter’s care.

As I sat by his side, carefully measuring just the right amount of food so he wouldn’t choke, I noticed his nods became more pronounced. It was as if he were creating a new form of communiqué. He bobbed for more food, jiggled to let me know it tasted good and shook when it was time to stop. In these precious moments, I was swiftly carried back to my childhood, when few words were used, and the movement of his face was his way of letting me know what he was thinking or wanting.

As a child, the only talking in our family was done by my mother. She was the consummate storyteller, taskmaster, disciplinarian, and purveyor of demonstrative action that said we were loved every second of every day. My dad, on the other hand, was a person of few words. To say he was the strong, silent type doesn’t even begin to depict his immense reserve. Though I never doubted his deep feelings.

Despite the fact he didn’t become all “ooey-gooey” like my mom, there was a look in his eyes that said it all, and the way he constantly moved his head in approval spoke volumes of his caring heart.

The tilt to his chin and wink in his eye at dinnertime told me that he was proud I ate everything on my plate. When I brought home my report card, the movement up and down with a beaming smile yelled loud and clear, “great job, honey!” And when I tagged player after player at home base in all my catcher gear regalia, the wild shaking, and ear-to-ear grin screamed above the throngs of the other parents, “that’s my girl!” And, late at night, when the house was quiet, and he thought I was asleep, it was his soulful gaze and light kiss on my forehead that said, “I adore you.”

One of my most precious memories, was the tearful bow of his silver mane as I placed each newborn grandchild into his loving arms. Without having to say a word, he was letting me know he was proud his legacy would live on.

Today, at ninety-five-years-old, my dad is even more vocal with his emotions. At night, in between his dinner nods, we talk about his life; what he is grateful for, what he is fearful of. He tells me over and over that he loves and adores me, but when emotions rise and become too strong to contain, the tears begin to glaze, and he reverts to his old ways as he slowly lowers and lifts his head and grabs for my hand. This gentle language between a father and daughter needs no words.

I’ve heard there are five languages of love: spending quality time, physical touch, giving gifts, acts of affection, and acts of service. What is your language to those you love?